After the birth of her second child, Erica Jefferson of Rapid City, S.D., was faced with a choice: Pay her student loan bills or pay more than $1,000 a month for day care. She chose the latter.

Keeping her job — she works as a claims processor for a funeral insurance company — was a necessity. Her husband, a veteran, was injured in the military and cannot work or physically care for their 18-month-old.

“That became a real struggle for us,” she said.

Having already exhausted her ability to defer her student loans, she opted for forbearance, a repayment option that typically requires only interest payments, but fell behind on those payments as well.

“My kids, they always have clothes on their backs, new shoes — they’re always well fed — but for me …,” her voice trailed off. “I have to pay day care. I have to pay rent.”

Ms. Jefferson, 32, is certainly not alone in the struggle to pay for child care. While there has been a lot written about the high costs of child care in general, we wanted to learn more about how day care and preschool expenses are affecting parents right now.

NYT Parenting worked with YouGov, an international polling and market research company, to create a brief online survey that offers a quick, informal snapshot of the costs faced by parents of children around the country enrolled in preschool or day care. Of the 1,027 parents who responded, 28 percent reported that day care and preschool expenses were a “very significant financial strain,” and 20 percent reported going into debt to manage these expenses.

According to YouGov, the median amount spent on preschool and day care was $400 a month, and 22 percent of the parents said they spend $1,000 or more.

YouGov collected the data between Aug. 1 and 6, drawing respondents from a database of 1.2 million people who agreed to take online surveys. The survey represented parents from a cross-section of the country, about half of whom reported living in a city.

One limitation of the study, aside from its small sample size, was the use of unverified self-reported data gathered online. In addition, when the respondents were asked about their day care and preschool costs, they were not asked to distinguish whether their costs derived from day care, preschool or both.

The survey did not include costs associated with nannies or babysitters, which can also drain a family’s finances.

Child care has become one of the biggest expenses faced by families in the United States. According to the Economic Policy Institute, annual infant care, on average, costs thousands of dollars, ranging from about $5,400 in Mississippi to more than $24,000 in Washington, D.C.

The costs are so great, they can absorb one person’s entire salary.

Maya Polack, 35, of Scotch Plains, N.J., left her career as a high school teacher in 2014 after her family was confronted with the high cost of child care.

“We looked at day care costs and quickly realized my salary would solely be for day care, gas, mileage, etc.,” she said. “So we had to ask ourselves: Do I love work enough? Because I would be working to keep our son in day care.”

Ms. Polack, now a mother of three, said she made the right decision for her family.

“In the end, it’s wonderful because I get to watch these three crazy monsters grow up,” she said. “For me, going back to work wouldn’t be a break from the kiddos but rather dealing with 200 more kiddos. And I really don’t see how I could have been a great teacher while being a great mother because of how much time is carved out for the students.”

Other parents said they try to navigate the huge burdens of child care by spacing their children far enough apart to minimize day care costs. 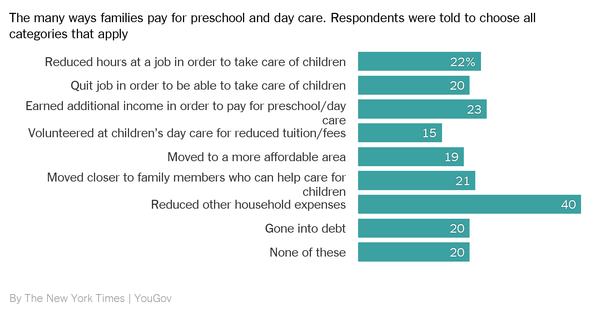 Despite the high costs involved, day care workers barely make a living wage. According to the Bureau of Labor Statistics, the average hourly wage for child day care services is $11.11.

Kristy DeConti, who owns Natural Learning Community Children’s School in Weatogue, Conn., has a master’s degree in early childhood special education and two decades of experience working in child care. Her yearly salary amounts to about $30,000, she said, and her seven employees earn between $13.25 and $16.50 an hour.

“I struggle with the same things everybody else does. I have $40,000 in student loan debt. I have two children. I have to pay for before- and aftercare for my older one,” she said. “But I don’t think people see that side of it.”

Ms. DeConti’s 3-year-old attends her day care, which saves money, but also reduces the number of children she can enroll.

Connecticut voted this year to raise the state minimum wage to $15 by 2023.

“I mean, I just don’t even know what I’ll do,” Ms. DeConti said. “Each year we’re trying to slowly increase tuition so we don’t lose a lot of families, but at the same time me and my family are barely surviving financially because of that.”

As for Ms. Jefferson in South Dakota, she said she fell so far behind on her federal student loans that this year the Internal Revenue Service took her entire $8,000 tax refund, money her family was counting on to replace a car that had broken down.

“I’m supposed to get paid tomorrow,” she said in an interview last week. “And right now I’m trying to figure out how I’m going to pay some of the bills, and buy food and diapers.